I bought in on this surging stock with a fairly close stop. When the market opened this morning below the stop it just kept dropping and never sold. When I manually sold it it sold immediately.

Why did it not sell? Thanks

I maybe miss something, but one screenshot shows Stop Buy. Other market sell? I was expecting Stop Sell order?

When I bought i used the ‘Stop’ function?

So where is the stop sell that didn’t trigger?

Have I completely misunderstood the stop feature? I see in the text it says to enter a price above the market value, but I entered a price below and it still bought the stock so I thought that was a stop loss.

Or do you have to do a sell stop to execute a stop loss?

So the stop is a trigger point where it’ll create a market order for you.

In a stop sell you would set the trigger point below the current bid. If the bid reaches that it’ll try and get the best bid at that time.

Eg the current bid is 10, set a stop at 8, the bid drops to 8 or below and the sell market order is created.

In a not as useful stop buy scenario you would set the stop trigger higher than the current ask.

Note: If you try entering stop sell above or a stop buy above the current then it’ll instantly convert to a market order. So totally pointless, it would be the same as clicking on market sell or market buy instead.

But as I used a stop buy below the current market price, why did it not sell when it dropped and reached the threshold?

You need a sell order to sell.

What you need to do to create a stop loss, is click on sell and then go to the stop section. Enter how many shares and then the value below the current bid when it’ll turn into a market sell. You also need to set expires to GTC (good until cancelled), otherwise it’ll expire at the end of the day by default. 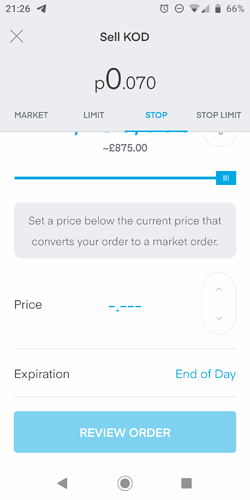 So to clarify what happened by doing buy stop order instead is you were instructing is:

When the price reaches 40.50 or above then create a market buy.

So it then goes ok, so the current ask is already above 40.50 so I’ll buy immediately which got filled at 40.92

I have mentioned a few times that it should have validation to prevent this as it makes no sense to do this. You would of course used the market buy if that was the intention.

Thanks for explaining, I see the error of my ways. I’m glad I’m just practicing!