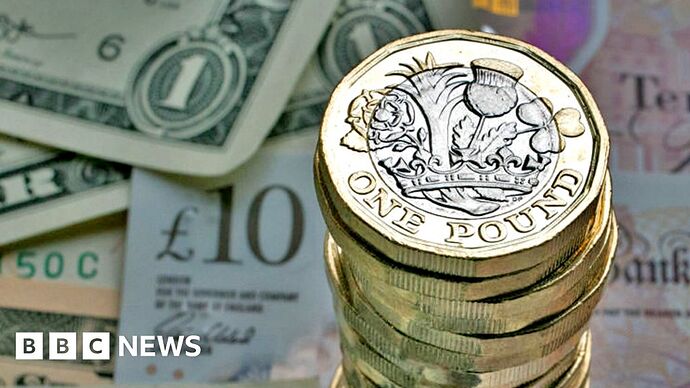 Markets worry over the outlook for government finances following the biggest tax cutting moves in 50 years.

Here is an alternative strategy.

It has never been cheaper for non UK investors, to invest in the UK, so will we see an influx?

Should UK investors sell their foreign holdings and invest in the UK?

I believe there’s a third option for UK investors & foreign to invest heavy on UK stocks.

I genuinely believe Liz is on on to something and if she pulls it off will see a massive transformation and growth in the UK.

Unfortunately Mr market doesn’t seem to like the orthodox methods but if we cast our minds back to the pandemic, the UK went orthodox against the recommendation of the vaccine manufacturers by extending the lag between first and second doses…guess what it worked and the rest of the world emulated.

The strategy is simple curb borrowing by increasing interest rates and at the same time promote growth by cutting taxes, simple economics that the market is struggling to understand.

The tricky bit is the timing, cos if inflation drops faster than anticipated which i believe it will, then the strategy will work perfectly well. However if the timing is wrong then that could spell a serious disaster.

I genuinely believe Liz is on on to something and if she pulls it off will see a massive transformation and growth in the UK.

In that case you’ll be shocked to learn that this has been tried before and it failed miserably in the 70’s by Anthony Barber. It was called the Dash for Growth and was even enacted in fairly similar macroeconomic terms.

I’m afraid what this is - at least to me - is a cynical cash grab from a Tory party on the verge of huge election collapse. The BoE know what this is, the IFRS know what this is, even the pound just showed you what this is and the OBS was banned from publishing their thoughts prior to the KamiKwasi budget being released…how strange.

They claim to be Thatcherites - Truss even dressed like her (gotta get them mamas boys juices flowing.), but appearances can be deceiving, Thatcherites believe that you cannot govern on the never never - meaning debt.

And they’re cutting 45bn in taxes over the next three years and raising at least an additional 75bn in debt immediately, which will raise our borrowing by 410 billion over the next 5 years. It’s a dangerous gamble in an already debt laden country, poor growth and productivity nation. We’re filled with a generation of people who forgot inflation existed and are used to debt being free and easy. All of this money spent and not a penny of it is going on any of our social services, all of which are suffering with the same rises in prices that you are without flex in their budgets.

Even the bankers know it’s rubbish.

Hi my most investments are in US equites. I understand when I buy US stocks my British pounds converted to US dollars to by US equites.
Do I understand correctly that if British pound is going down against US dollar then I am gaining in terms of currency appreciation.
For example if I bought 10000 pounds worth of apple stock 6 months ago and pound is now down 20% or so in the last 6 months and now if I sell I gained 20% in terms of FX convertion rate

We’re filled with a generation of people who forgot inflation existing and are used to debt being free and easy.

To be fair, it’s econ 1o1 since the greeks; in times of inflation, debt is cheaper fot governments. Tried and true, sometimes happens to shaft people.

Edit: i guess i should specify now; while it has been a rather common mix throughout history, and one that tends to make sense, I can’t think of the top of my head any time period where that lead to economic growth, besides 1930 Germany, where it did indeed work out for a little while

Pretty much yes. This can go both ways, and it can be costly to hedge FX movements. This is why most tend to recommend investing globally so it all balances out in the long term.

I don’t agree with a lot of the Tory policies, but there are some that I think are reasonable. If you work hard and earn a good wage, why should you be taxed at a higher rate than someone else? The opposite to that - I don’t think putting more funds in higher earners pockets, will help the economy. For me, personally I am going to invest.

At the other end of the scale - we need to encourage people to work, and make it such they are better off doing so. The weekly Dole money, forgetting all the rest of the state benefits, is the equivalent of 7 hours work at minimum wage. So get them to do an apprenticeship or a days work. If they want something better, then they have to go out and get it.

I actually think, there is a lot of hidden Value in UK and EU stocks right now. Not everything, but there is good value to be found and I suspect I will be buying up some shortly once I’ve increased my cash buffer to 9 months.

One thing I am not hearing much about is inflation and property, or rather property mortgage debt. The headlines and focus is understandably on interest rates going higher making borrowing harder or more expensive. However if you can/have borrowed at say 3/4% recently on a mortgage and fixed for say 5 years and inflation persists lets say an avg of even 5% next 5 years then you debt is really being reduced. Now this takes longer to play out and is less visible but over the long term inflation can help debt burdens. Of course you have to be able to manage the debt and service it at levels that may vary.

if you can/have borrowed at say 3/4% recently on a mortgage and fixed for say 5 years and inflation persists lets say an avg of even 5% next 5 years then you debt is really being reduced. Now this takes longer to play out and is less visible but over the long term inflation can help debt burdens

Exactly this and some more characters.

Thanks for your reply. I think I have been lucky.most of my investments are in us equites.I never intended to hedge,gain or loose from fx fluctuations.luckily US dollar has gone much higher since I invested. I have big portfolio,I think Dow me it’s now wise to start buying the pound slowly to protect my gains. I intend to hold my us equites for next few years

You probably have seen this but you can see this FX impact in the Trading 212 app or website for each of your US investments, click the ‘i’ next to the return field on desktop or the arrow drop-down next to the ‘return’ field on the mobile app. example below from my apple position

This is just depressing: 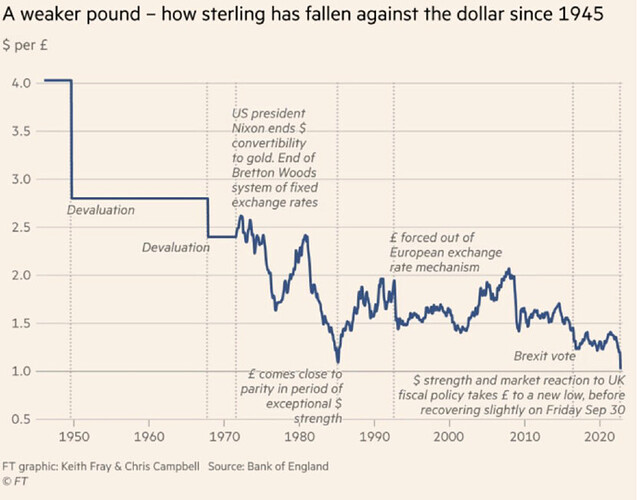 …oh…but there’s never been a better time to buy

For foreigners to buy U.K. assets at a discount, yes.

Or it’s a boon for those U.K. investors who already held foreign dollar based assets.

Any U.K. buyer of foreign securities now though could be burned by a rally in the £ if the political/economic climate changes over the next few years.

On inflation, I think it’ll rumble on for longer than most think. Particularly in the UK.