Can’t knock a new build. Without them there wouldn’t be enough houses. Hahahaha. Can’t build the old ones can we? I don’t buy all this “they’re not built like they used to be” as a sweeping statement. I bought my first new build which was absolutely shocking. But I made £100k on it in 3 years. So that is why new builds bought off plan are good! Next new build was Bloor homes. Good quality home but a more premium builder. The prices I picked up house builders at during the rock bottom of the pandemic means they aren’t leaving my portfolio. Cheap dividends and can only see long term growth in the sector.

Thats interesting I hadn’t fully considered those aspects, I have read that going forward more mortgages may be tied to energy ratings etc so perhaps new builds will get favourable mortgage rates in years to come.

Also I think my bias towards older stock is more in the property as an investment side of things, which generally older buildings will be better investments in terms of location and therefore rental yields etc.

Yep buying off plan is an easy way to make money. They really aren’t built to the same standard though ,it’s not even a debate, ask any skilled tradesman.

Yep another thing I avoided like the plague. Took the 95% mortgage on the first house and the higher monthly payment…but all the gains were mine!!! Hahahahaha.

And yeh I agree most of the new builds won’t be standing as well as the old ones are 100 years down the line. They just throw them up and don’t let the foundations even settle like they used to.

What are the bear cases for housing stocks right now? Is it simply interest rate rises and the cost of living/inflation? Or is there more factors.

Those are massive issues potentially, but for example 130p Taylor Wimpey on a 118p NAV seems like a fairly low risk, what am i missing?

Material costs have doubled in the last year and are set to go up again significantly next month, labour costs could go with it.

Other fears would be a change in political climate could force UK housebuilders to have to give up or sell landbank they’re just sitting on which could weaken moats.

Rates, prices and labour costs are rapidly driving up prices for sh!t box houses with no character - it can’t be sustainable.

Ah yeah I hadn’t figured in the material/labour side of inflation, makes sense. Just always hard to bet against the house-builders long term in the UK as the govt seems to always end up propping the industry up. Definitely due a housing correction thought, but when who knows.

It’s a cyclical industry and it’s peaking the charts will tell you that. Still money to be made I’m sure but you’d have to think time isn’t on your side.

Update, I went ahead and bought a UK housing stock.

Which one did you go for?

Recently bought Lloyds for their large housing (mortgage) exposure, as feel less risk than a house builder, but I wanted both some housing market exposure just in case it doesn’t collapse in the next year or two, if it does then I will be looking to buy distressed assets link to property.

I think Taylor Wimpey still the pick of the house builders for me if I were to jump back in.

Well it seems to move in a range due to them distributing 7.5% of NAV so it is unlikely to ever get to multiples of the share price, so I think I sold around 170-180 that 150p ish buy. I think also probably had a ‘better’ option. Thats why now its back down to 130-140p it peaks my interest, just with inflation and cost of living not sure if housing will push on or take a turn for the worse, so for now went with Lloyds for some less risky exposure. Also TW while you hold part of its benefit is capital returns, but Lloyds with their roughly 10% capital return this year through divs and buybacks was comparable to a house builder whilst also providing an interest rate hedge somewhat.

I understand TW as been following for quite a while, so always on my watchlist, see my post quote below from Oct 21, NAV i was surprisingly accurate (120p vs 118p actual), must check my working how I got that again haha

so close
To be honest as things play out I may jump into TW again if no better options or looking for housing exposure, just feels like next few months are crucial to see how interest rates and inflation play out, housing market feels like it could turn, but I equally had anticipated strong growth until 2024-25 before it turns, we will see.

For reference my TW thoughts ealier:

Haha, I got a little more today around the 153p mark, previously I had a price alert at 151p and few months back it got to like 153/154 and didn’t trigger haha. Short of a housing crash

SUPR is raising on PrimaryBid today. Ok not strictly a housing stock but similar theme. 4.3% discount at 121p a share, £250 minimum.

I shorted Nasdaq…literally got stopped out due to stupid reversal if that hadn’t stopped out id be serious bags up now. That was when the index was at 14000

I’m sure you’ll get another chance.

I think the next 6 months are going to be very interesting property wise. Will the market follow the general consumer fear? Or will it stagnate for a bit then push higher for a couple more years before a significant crash.

One Euro Homes in Italy. Where is the catch ?

There are documentaries about this. For example from SBS 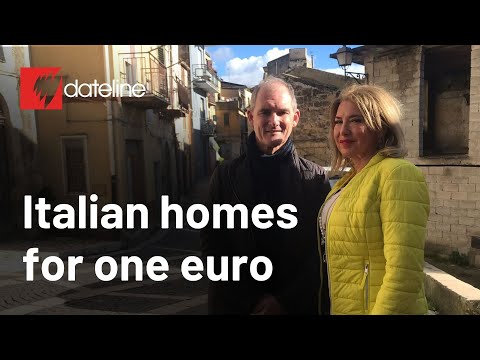 The 1 Euro Houses Projects are available all over Italy. Here's where and how to buy 1 euro houses in Italy.

Also if you search there are other documentaries from other sources. But I have not done a deep research.
Want to know the pro and contra about buying properties like this especially from those who have invested in similar properties like this in the past.
I remember similar case exists in Berlin during the fall of Berlin Wall. Some people who bought cheap dilapidated properties in Berlin soon after the fall of Berlin Wall has become multi multimillionaires by now.
It is definitely not EUR1, if you include other costs such as conveyances, and other admin costs? But even £1000 at least their value will up multiple in more than a decade ? Let alone if it is a freehold. You do not need to live there just buy and forget, let it empty and play a waiting game. There will be no more cost for maintenance or travelling cost to Italy. Council tax presumably will be very low due to the value of the property. What is your opinion ??

Let alone if it is a freehold. You do not need to live there just buy and forget, let it empty and play a waiting game.

This isn’t how the scheme works. Italy has an issue with people leaving rural villages and being drawn to more metropolitan areas, so it’s hoped that this draws some of the younger crowd - who can’t afford to buy in the city to pick more rural.

Nothing is free though - these houses are often run down and bruised and you are required to bring them back up to code within 3 years or they return to the municipality to be resold.